I’ve been a little slack in keeping up with this blog – one reason being that I was away on a road trip with my folks, and I’ve been a bit snowed under with work since I got back. Sorry ...


So how was the trip? I have to admit, it was a lot of fun. New England in October is ridiculously picturesque, with those vibrant fall colors and we had clear, crisp Autumnal weather for most of the trip, which essentially involved driving from one historic B&B or tavern to another.


My father and step-mother, however, despite being out of their native habitat, do not seem to get that (a) America is not England and (b) it is in the 21st century. We constantly had questions about whether we had relatively normal things (e.g. TiVO, to the door mail service, instant coffee), yet surprise when English things aren’t routinely found in America (e.g. HP sauce):


“Yes, that's because we're not in England!”


My step-mother also had a rather irritating habit of saying “Oh gosh, really?!” after everything we said. But still it was a nice trip.


The rather convoluted journey was aided by my new TomTom GPS which has Stephen Fry’s voice programmed into it. Navigating foreign terrain is so much calmer and less fretful with the calming tones of Mr Fry telling you where to got and asking to “turn left up ahead if you wouldn’ mind”, and “it would be terribly nice if you changed lanes now”. Towards the end of the trip if felt like we had him in the car with us, and we actually started conversing with the TomTom as if it were alive. Anyway, to cut a long story short, here’s a little summary of the trip:


Day 1 – A mammoth drive from Virginia, through Maryland, Delaware, New Jersey, New York, Connecticut, and finally finishing in Massachusetts. We stayed in the college town of  Hadley, at a quaint B&B built in 1795. For poster beds and crumpets for breakfast, who could want for anything more. 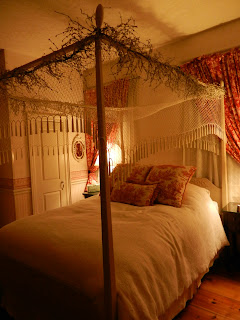 Day 2 - Up through MA, stopping in Portsmouth New Hampshire for lunch at the Portmouth Brewing Co (best known for the Smuttynose brand), for a flight of beers and to fill the trunk with “supplies”. Then we headed up the coast to Maine. Home for the next night was "the captain's house" - a quaint B&B on the shore. I love the Maine scenery, especially when it’s foggy and slightly mysterious. There were a few times when if felt like we were driving through a Stephen king novel. 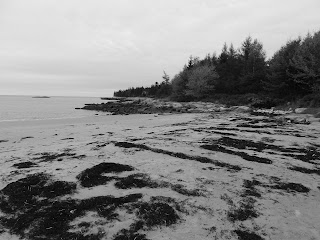 Day 3 - The Captain’s house is famous for its food –and the day started with fantastic three course breakfasts starting with fruit soups and serious coffee. Behind the B&B was some extensive bogland with trails,that had to be explored. We were on a quest to try to find moose. However, some serious rain a few days previously meant that the trails were more like “the fire swamp” in the Princess Bride, and we expected to at any moment be attacked by rodents of unusual size. The weather started to close in, but not before hiking off to a coastal headland and looking for ghost ships amongst the fog and murk. 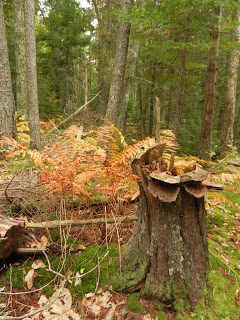 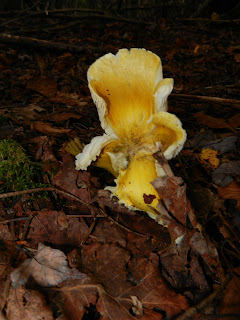 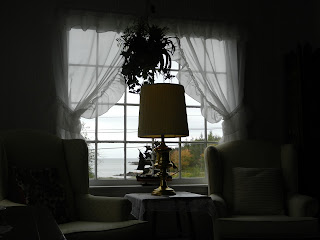 For the afternoon, we headed into “Bahaba”, a town with more lobster, moose and lighthouse crap for sail than you could shake a stick at. Also, there appeared to be only a dozen people in the whole town below the age of 60. Beer supplies were already running low, so they were replenished at Bar Harbor Brewing Co. 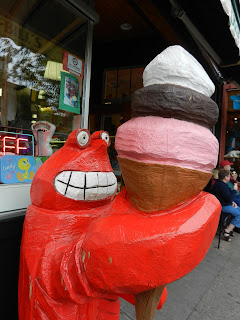 Back at the Captain’s house, a fire had been lit, hot chocolate was brewed up, and a couple of bottles of local wine were opened. Evening in front the fire place reading books on comfy chairs in front of crackling logs, was a perfect end to the day. 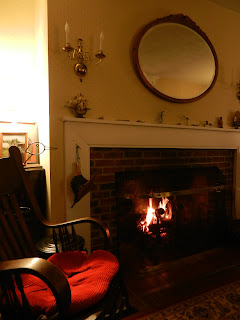 Day 4 - More excellent breakfast although our enjoyment was somewhat diminished by loud oil & gas executives in the adjacent dining room criticizing “nutjob”, “hippy”, “treehugging” environmentalists and criticizing the government for the temerity of trying to introduce some environmental safeguards. From the anecdotes that we heard about cutting corners and corruption, it seemed that the government wasn’t regulating the oil and gas industry enough. However we were far to British to make a scene and scoffed down our cranberry and blueberry pancakes with maple  syrup in silence, then slipped into diabetic comas.


More driving to the historic Jameson Tavern, in Freeport (Maine). As an aside, this tavern is reputed to be haunted by the ghost of a girl called Emily, and a mysterious lurking figure in a top hat. A block or so away, or foggy and stormy nights, the locals say you can sometimes the ghost of “The Dash”, a sunken schooner, possibly a smuggling vessel, Freeport’s own version of “The Black Pearl”. Ghosts aside, the tavern had the best pub fries ever, hot chocolate to die for, and some extremely nice ales (thumbs up for Dr Hyde's angry ale and Gritty's Halloween seasonal). 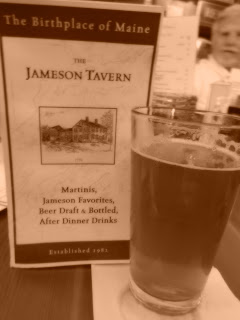 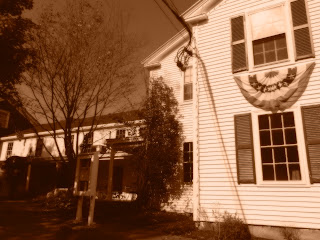 The entrepid adventurers, then turned away from the coast and headed inland into New Hampshire and we stayed in another 18th century B&B in Hillsborough. Another four poster bed and a gorgeous fireplace furnished lounge. We popped into town and yet another tavern in a historic buidling : “Tooky Mills”. Although unlike most of our tavern visits, this one hadn’t always been a pub in the 19th century it had been an underwear factory – which explained why it’s décor included long johns and bloomers. 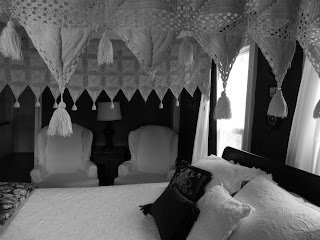 Day 5 – We headed into the historic center of Hillsborough, which was quaint as quaint can be. There were a number of traditional crafts shops, and the family aided the New Hampshire economy by spending nearly a thousand dollars in the pewter shop alone. I’m now the proud owner of a tankard the size of my head. Basically a metal bucket with a lid, although technically I have to wait until my birthday next year to use it (it’s a present). The afternoon involved a bit of work and visiting a friend who was giving a lecture/book signing event on killer whales, then off along rural roads, driving through leafy avenues and passing mom and pop convenience stores and maple syrup stalls, as we tootled around New Hampshire. As dusk drew on, the scenery became more and more like “Sleepy Hollow” as if a pumpkin-headed horseman might leap out in front of us at any moment. Very atmospheric. 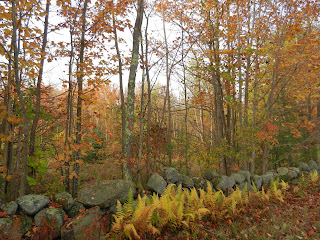 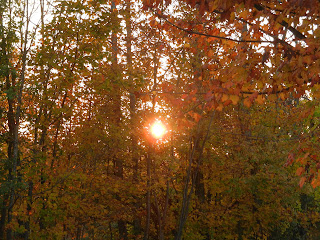 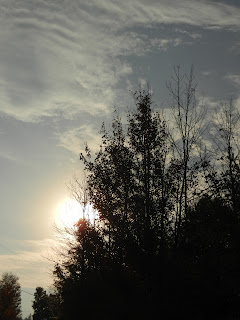 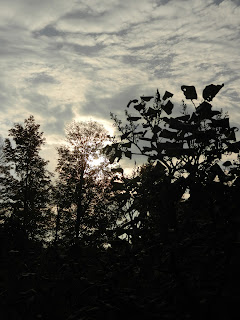 Vermont was also a great place to stock up on supplies. Any remaining space in the car was filled with cheeses, maple syrup, preserves, beer/cider and other such goodies.


The final night was spent in Bellows Falls, Vermont and we had a slap up final dinner in Leslie’s Tavern (est 1795): mushroom soup, mushroom ravioli and pumpkin cheesecake. Pumpkin spiced beer and local reds. Mmmm. 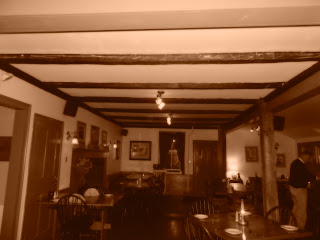 Day 6 – Time to get back to Virginia, reality, and less face it, dieting – the trip had been extremely calorific and the liver cells needed a bit of a rest L But all in all, a good time was had by all. 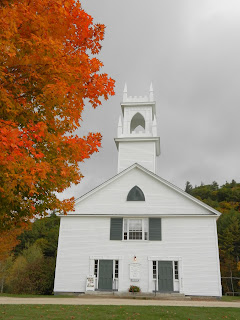 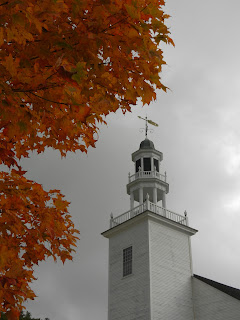 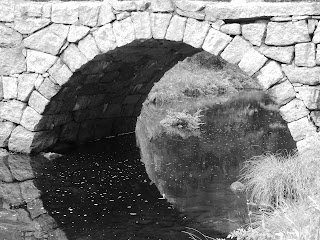 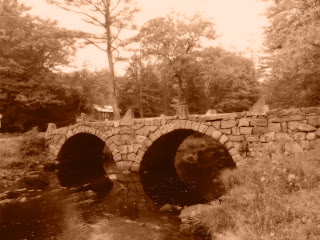 Posted by The kraken in the aquarium at 3:10 PM 1 comment:

Proud to be a Murican

So I have finally become a us citizen (actually a dual citizen, as I could no more give up my UK citizenship than I could give up beer and chocolate - my Britishness is such an intrinsic part if me).


This is a process that has cost over a thousand dollars, has generated an inch thick file of documents and as an introduction into what it means to be in America, I have to say it does not flatter the country. Throughout, the whole process has been marred with chaos and incompetence. Lost paperwork that miraculously reappears after a call to the local congressional office - this has happened three times, and it smacks of corruption with a soupcon of evil, when who you know seems to help your process along, and without it your application is filed into the big round file on the floor. Also, letters contradicting them selves arrive from the powers that be (e.g. a  letter saying "we have not received your paper work and therefore are canceling your application" arrives on the same day another lands on the doorstep noting that my paperwork has been received and processed, etc etc etc.). Finally, the State of Virginia unilaterally deciding to change my name, leading to me have to petition the court to change it back...
Once I got my final notification that my citizenship "ceremony" was nigh, I thought the it was the end of the trail of trials and incompetence, but no, the immigration service had to have one last hurrah,
First, the address of the event said the immigration offices - it turned out it was actually in a community college's theater. As a result, a lot of participants actually went to the local offices, and missed the event.
Not as many as should have done though, because although the invitation letter distinctly said be the at 8 am without fail, immigration officers did not turn up until 8:30, to funnel 400 or so people crammed into a tiny vestibule with no idea what was going on. So there was time to get to the (closed) offices and then try to find the actual venue. Then came the farce of processing 400 people in said vestibule, with just half a dozen officers having to check everyone's paper work.
Finally everyone was seated and ready to progress by 10:30...
The initial part of the ceremony had us stand up as our original countries were called. The chief immigration officer making announcements was incredibly "chipper" yet profoundly patronizing. She so reminded me of Effie Trinket (from the Hunger Games) that when they called on me to stand, I felt like yelling out "I volunteer to be tribute!"
There then followed the oath. Now, myself, along with many others, were there to become dual citizens. However the oath you have to say has you renouncing all ties with other nations absolutely - effectively your first act as a citizen is to effectively lie. I could not bring myself to do that, so instead of swearing a blatant lie and to "absolutely and entirely renounce" my allegiance to the UK, I said my own oath: I "do not entirely renounce" ...
We were then congratulated and given little stars and stripes flags to wave, like a bunch of kindergarteners as they played a DVD of "I'm proud to be an American" * which the audience could sing along to.


Effie Trinket then reappears to congratulate us and talk to us like 3 year olds about how exciting this was and did we want to have pictures taken with immigration officials. I got out of there as soon as I possibly could, back into the jam-packed vestibule and the crush of 400 people trying to get their citizenship certificates, while a hundred or so more who had gone to the wrong location cried and pleaded to be allowed to do the citizenship ceremony. It was 1pm by the time I left.
By the end, a potentially solem and patriotic event had basically been reduced to the level of organization and grandeur of elementary school sports day. A lot of people were frustrated, irritated and upset on their first day of citizenhood, pride was not something felt by the majority.
Anyway, so now I'm a US citizen. I can vote. For the first time in ten years of paying taxes, at a rate more than double that of Mitt Romney I might add, I now no longer have taxation without representation. I think there was a bit disagreement about that in the past ...

*link to the karaoke version, so you can sing along too...

Posted by The kraken in the aquarium at 12:11 PM No comments: