Even been on a publishing project or paper when one co-author has never replied to emails,  been completely unreasonable in terms of edits, or who wanted a large slice of the pie in terms of author listing? In particular, have you ever been a student and senior faculty or supervisors have insisted on being a co-author, or even lead author on your paper although they did precious little to help? Did you feel powerless and frustrated?

We've recently published a paper on problems that might arise when publishing, and an idea for an author's agreement, that could hopefully solve many of these conflicts, or at least put you in a stronger position to expel troublesome co-authors from your paper.

The paper itself can be found here

It must have hit a chord with the scientific community as it's already in the top 40 articles (ever) for that journal for social media buzz/shares etc, and it is only in press and not actually properly published in an issue yet.

There is also a blog article on the paper, which you can find here.

For those readers who are scientists, I hope you find the paper useful.
Posted by The kraken in the aquarium at 3:20 PM No comments:

Oh, how times change - an illustration from the underwater noise and cetacean science field

I  was talking to a student the other day about how scientists attitudes to some cetacean conservation issues have changed, that some things that were derided a decade ago, are now accepted as scientific fact and accepted as a problem. This is especially prevalent in the issue of noise and whales and dolphins.

Here’s an interesting example I just found. In a paper I published in 2008  on the possible impacts of navy sonar we said that navy dolphins might not be the best models for responses of naive wild dolphins due to their training,  habituation to noise exposure and their noisy environment (San Diego harbour). Here's an extract:

…“It is possible that the high levels of background noise in captive facilities lead to hearing impairment ... and even deafness ... either of which could potentially also result from years of exposure to sound during controlled experiments.”*

This was heavily criticized by two navy-funded scientists in a rebuttal paper:

“[they] state that such physiological measurements are debatable as to their relevance to wild animals…  An example of the overreaching zeal of the authors to denigrate ‘captive animal’ research is found on page 1251 of the article when they say “It is possible that the high level of background noise in captive facilities led to hearing impairment"** etc etc etc ...

I just found this in a paper written by one of the authors of that rebuttal noted above that was published last year (5 years later), in which the same research team  measured the responses of US navy dolphins to sonar exposure:

The researchers noted that the responses of the dolphins:

“are likely not directly transferrable to conspecifics in the wild. The dolphins have years of experience under stimulus control, which is a necessary condition for the performance of trained behaviors, and they live within an environment with significant boating activity. These factors likely impact the threshold of responsiveness to sound exposure, potentially in the direction of habituation or increased tolerance to noise.”***

This is exactly the point we were trying to make 5 years previously, but we had been derided by  the same researchers accusing us of being anti-captivity zealots and bad scientists.

Schopenhauer once said that all truth passes through 3 stages: first you are ridiculed, then you are violently opposed, and then it is regarded as self-evident. I think we’ve got to stage 3 !

Posted by The kraken in the aquarium at 3:05 PM No comments:

Ever tried to publish a scientific paper? This probably means you've also had a paper rejected, and likely received some strange and unusual reviewer comments to boot. This happens to the best of us, and if you stay in academia, it will happen A LOT. So to take the anger and frustration out of bad and unreasonable reviews, why not have a game of rejection bingo ...! 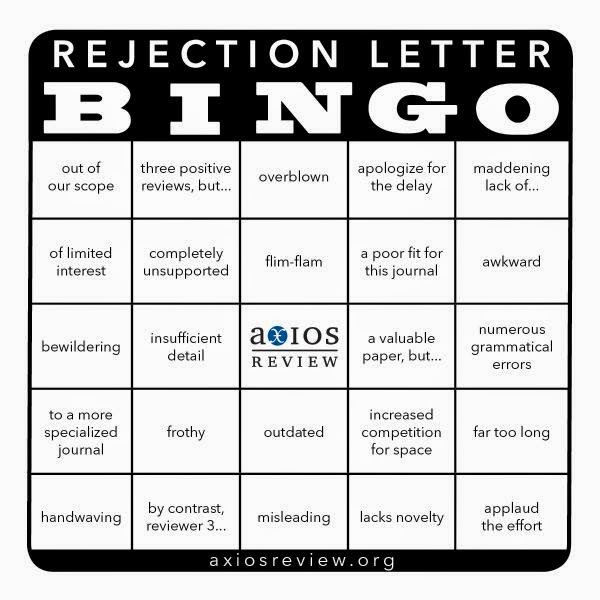 Posted by The kraken in the aquarium at 2:46 PM No comments: