If it isn't obvious from this blog, I'm a great big geek. One of my geeky passions is to play roleplaying games like Dungeons and Dragons and Vampire the Masquerade. But I was just reading something online about the number of women that feel uncomfortable about getting involved in roleplaying games - and that they feel it's an exclusively male pursuit.

Well if you feel this way, or know someone who does, I highly recommend watching the online show Critical Role. It's basically a group of geeky actors (you might recognize some of them) who play Dungeons and Dragons every week, and half of them are women. Seriously, there are a lot of women roleplayers/gamers.

If you need more evidence, below is my current roleplaying group - men are the minority (the costumes are from a party - they don't always dress like that). There are also A LOT of university degrees shared between them.

So don't fall for the stereotype that that 20-sided dice carrying geeks are mostly male, there is a lot more diversity than you think. For we are geeks, and we are legion ! 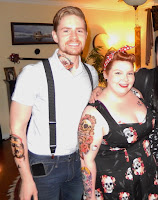 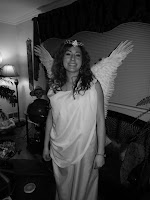 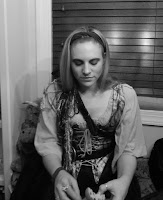 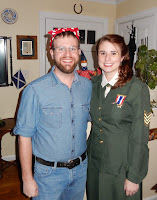 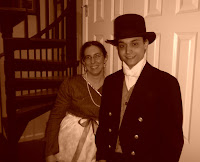 Posted by The kraken in the aquarium at 5:29 PM No comments:

On Thursday,  George Mason University announced that it was renaming it's law school the Antonin Scalia School of Law. As the press published this information on Friday April 1st, many assumed that this was an April Fool's joke. After all, who in their right mind would name a law school ASS Law, or the even worse ASSoL ! Sadly, the administrators at George Mason.... It took approximately 10 seconds for students to work out the acronym. #ASSLaw trended on Twitter, as did #ASSOL. 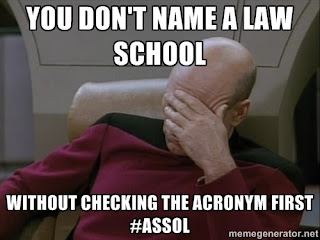 So immediately the University was made a laughing stock.

However, that was not the only problem. George Mason reputation as a mover and shaker is largely built on two things: its high student diversity and its innovative conservation/environmental programs It's ranked in the top twenty greenest schools because of its environmental programs and sustainability initiatives. So what better way to compliment this than by naming its law school after a supreme court justice who consistently voted against environmental protection and minority rights. Scalia publicly and  infamously made disparaging statements about black law students.

Moreover, the press release about of the new law school was coupled with an announcement that the law school will receive a $10 million donation from the Koch Brothers, the famous climate-denying, and environmental science opposing, duo that have invested millions in anti-environmental propaganda.

Suffice to say, the announcement led to a deluge of protesting emails from George Mason students and alumni. Some incoming students stated that they were reconsidering their application to the University and many alumni announced that they won't donate to their alma mater until the law school's name is changed. There were a few supporters of the move, although they appeared to me mainly rather extreme conservatives complaining about "damn liberals" at universities.

George Mason university is named after a famously progressive founding father who introduced the Bill of Rights to Virginia and who lobbied for a Bill of rights in the US Constitution. He is probably rolling in his grave right now ...

This massive PR faux pas comes a little more than a week after George Mason police announced that they had arrested students in a dormitory for having "bomb-making materials" which led to a social media storm about terrorists on campus. This led to a flurry of ill informed press articles linking George Mason to ISIS terrorists, whipping conservative commentators up into a lather of racist diatribes. It turns out the students were a bunch of frat boys with "bong-making materials"...! 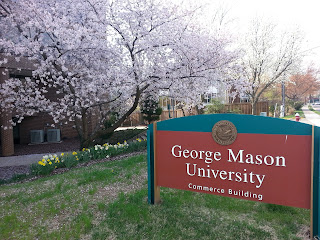 George Mason has a new President and Provost who are very pro-business and notably more conservative leaning than their predecessors - under whose watch George Mason's reputation for diversity, innovation and conservation and sustainability were built.

In September last year, Professor Jagadish Shukla, professor of climate dynamics and 19 other climate scientists sent a letter to President Obama, the Attorney General and the White House Office of Science and Technology calling for “a RICO investigation of corporations and other organizations that have knowingly deceived the American people about the risks of climate change”. This led to a campaign of harassment from Rep. Lamar Smith  the chair of the House Committee on Science, Space and Technology against Professor Shukla (this is rather the modus operandi of Rep Smith to intimidate climate change scientists that advocate for policy change).
It has been noted by both faculty and students that there has been no public statements of support from the GMU President or Provost to support Professor Shukla and his colleagues against this Congressional bullying. The scientists were well within their rights to advocate against practices that obstructed, smothered and distorted climate science research findings. But the silence from senior administration has been deafening...

Perhaps a $10 million donation from the Koch Brothers buys more than just naming rights to a law school?

Regardless, the new law school naming has been a PR disaster for the University. A disaster that could have very easily been avoided if they had discussed their decision with faculty and representatives from student body. Within minutes of the announcements, predictions of the negative social media fallout were made, predictions that rapidly became true, if not even surpassed.

Posted by The kraken in the aquarium at 7:43 AM No comments: