So my job involves conducting research on dolphins, amongst other things, and today I went out to check a possible research site. The boat I was on, was the catamaran "chewbacca", skippered by Marcel - a German who had opinions on everything. It was quite entertaining to listen to him rant about how humanity was destroying the environment, how corrupt politicians were, the social complexities of life on a small island, and pretty much his entire life history. Diverting though it was for the length of a boat trip, I pity his poor wife. 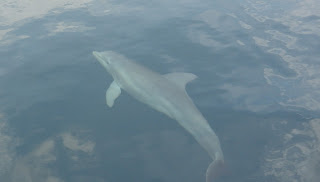 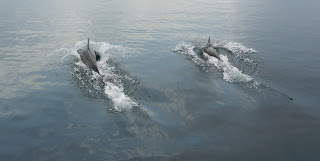 The dolphins, when we found them, were in a small bay surrounded by mangroves. there were perhaps 6 to 8 bottle nose dolphins in the group. When we arrived there were 6 speed boats surrounding the group. As soon as they moved, the boats sped after them. I have to hand it to Marcel, he approached the area just how a good dolphin- watching operator should. Dead slow, and let the dolphins come to him. Which they did. To me they seemed to be using the boat as a shield from the other vessels, and their behavior also changed - spending much more time at the surface. When being mobbed by boats, they seemed to be spending as much time underwater as possible. There was clearly a problem - there needs to some serious management of the dolphin-watching, and part of the plan is to set up some graduate students to watch the area, monitor the impacts of the boats on the dolphins, and ideally suggest controls or protective measures. One idea is to set up a pontoon at the edge of the bay, where boats can moor and tourists watch the dolphins from there. That would certainly do away with a lot of the disturbance, but the trouble is getting the tourists and operators to buy into the idea. 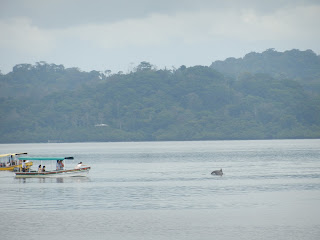 Also checked outcome areas of coral too - actually in very good condition. I've been to many parts of the Caribbean where reefs have been pretty decimated by damage from boat anchors or clumsy tourists, siltation from costal development, or covered in algae thanks to extra nutrients from untreated sewage. But here was some of the best reef I've seen for some time. Probably because apart from a few small areas, there is little development. Most of the owned islands are owned by rich Americans that build just one big house, and leave most of the rest of the island untouched. As opposed to other parts of the Caribbean where every inch of coast has a hotel or pier on it. So that was something positive. Although, after snorkeling on the reefs, we kicked back and drank a couple of beers on the deck of the "chewbacca", so I was probably in a good mood in general.

One of the most adorable things I saw today was a little tri-colored Jack Russell terrier playing with a plastic bottle. It was on the end of a pier, and would throw the bottle into the water. After barking at it a bit, the dog then leapt off the pier (maybe a 6 foot drop), grabbed the bottle and then swam for land (about 40 feet away). After he dragged the bottle up the beach, he then went back onto the pier, and repeated the process again. It's like he was playing at being a lifeguard, pretending to be David Haaslehoff on Baywatch, but without all the slo-mo running. I've been craving a dog, and watching this little guy entertaining himself, just made me want one even more. 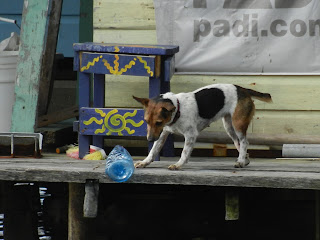 Tomorrow, off canoeing and to do a little diving.
Posted by The kraken in the aquarium at 1:17 PM