Finding the chamber of secrets and football politics

So now in Panama City. An interesting, crowded place, basically one big development site where skyscrapers are being continuously built, but often not finished. This, apparently, is because Panama where South America drug money comes to be laundered via massive construction projects. I’m here to take part in the Scientific Committee meeting of the International Whaling Commission (IWC), specifically a small pre-meeting workshop on marine renewable energy and impact on whales and dolphins. I often get people say to me enjoy your conference when I say I’m heading off to the IWC,  but conference is to the IWC meeting as a toothy smile is to root canal surgery. It’s an international meeting, a big like a mini- Rio Summit, but not as friendly, or as constructive and all focused on whales and dolphins, usually arguing back and forth between conservation and whaling. What actually happens at the meeting is actually secret until the official report is released, so I can’t tell you actually what’s happening, on pain of, if not death, then at least a stern talking to. 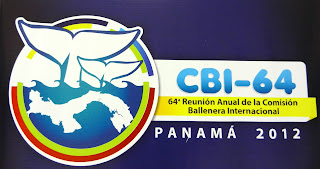 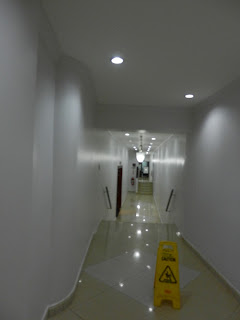 The passage to the chamber of secrets


Arriving at the venue, we discovered that the convention center being built around us. Just weeks ago, they were laying concrete on the floor of the main meeting room. All around us, there are people laying plaster and painting. The smell from the fumes is quite overpowering. To get to our meeting room, we were led through the construction site, and then through a series of twisting underground corridors, and there at the end was a tiny frozen room - like the Chamber of Secrets, where we would be holding the meeting. The aircon in the hotel seems to be permanently set at 40oF, which is making the Alaskan participants from Barrow feel at home, but means that the rest of us are shivering. It’s made worse because we have to keep leaving the building, and one moment we are hot, humid and sweating, the next damp and chilly – I am afeared I shall come down with consumption before the meeting is out.
Going on in the background at the moment, we have the world cup qualifiers and Euro 2014 football matches (soccer for Americans) going on. As an international meeting with lots of passionate Europeans in particular, there is an undercurrent of national rivalry over football, in addition to national rivalry with opinion about whaling or whale conservation. Korea and Japan (two the main whaling nations) did particularly well in their world cup qualifying matches and there were depressed murmurings as to whether this was an omen for things to come. However, Antigua and Barbuda, one of Japan’s chief hench-nations with respect to supporting whaling, lost to the US last night, so that improved morale. But it might mean that A&B is going to be even more grumpy and adversarial to the US for the next few days. Panama also won its match against Honduras, which even if you weren’t watching, you would instantly have been able to tell as all the cars in the city started honking their horns and there was widespread cheering and singing in the streets. Incidentally, the internet in Panama pretty much went down immediately after as the nation swarmed to facebook to celebrate, so I apologize to the two people I was bantering with at the time, for suddenly vanishing.


(PS the qualifying match between Brazil and Argentina caused some consternation, as both countries are usually big allies and staunchly pro-whale conservation/ anti-whaling, but luckily they drew 1:1 and so both are happy)
Posted by The kraken in the aquarium at 7:26 AM